Too many to count actually and I'm certain there must be people's there who eat some of them but I did not have time in a short week to learn all the ways of Belize.  For certain, the people I met there are friendly and open to new ideas as we were able to share some reflective solar cooker ideas and left a working unit with a couple of the local Kekchi Maya who served as our guides and companions where we stayed at  Roaring Creek.  I can fully imagine they will love this and spread the word among the population who for the most part, cook in open stone fire pits either inside their dwellings or just outside the door that must be constantly tended.

I'm fascinated by the sea, always have been, always will be.  If you like to read awesome adventures, I found this blog by a fella who is currently making his way down the Carribean Coast in a small homemade outrigger boat.

Cudo's Chris!  Man you are either way crazy or very brave...or both.  I'm totally captivated by your adventures and will be sad to see it end.

Now back to Belize.  It is very humid there.  So much so that termites build crawl tubes up the sides of trees and make huge nests among the branches.  Talk about an abundant source of protein and easy to get!  I would venture to say there are enough termites alone in Belize to feed the entire population if they so chose to take advantage of it.

Having said that, I saw quite alot of poverty while there, yet never saw one person who seemed to be starving.  The people look quite healthy and seem to be well fed.  Not too difficult I imagine seeing that nearly every tree seems to have some sort of fruit or nut and the waters there are full of fish.

I can't wait to return.  Belize just seems to do something to me I can't explain.  It was like I had been there before and belong.  See ya later Belize. :)
Posted by Charlie Little at 4:57 AM

All comments are moderated prior to posting.

Gourmet Bugs is a work in progress. We're thinking, designing, building toward a future business. This is our journey into raising insects and/or their various life stages for human food (Entomophagy), pet feed and fish bait. Our "Clean Bug System" is designed for various insects specific rearing needs and to keep their frass out from the enclosure and away from the creatures. Composting earthworms, either in bins directly below Gourmet Bug enclosures or elsewhere will convert the frass into worm castings. 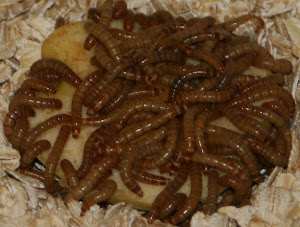